One of the most incredible features of Sucker Punch’s Ghost of Tsushima is its photo mode. Not only is it flexible and packed full of great options, , it’s a snap to access: simply push Right on the D-pad and the action freezes, allowing you to line up that perfect shot. With the exception of some pre-rendered cutscenes, you can enter photo mode at any time. This functionality and ease of access let you capture incredible moments in the action, such as freezing a spray of blood mid-air as Jin’s sword finds its mark. But it’s also incredible for capturing landscapes, with a wide range of lens lengths and apertures available.

Basically, if there’s a type of photo you want to take, Ghost of Tsushima’s photo mode has an option for you. It is, in short, the best photo mode in a video game yet.

Before you read why it’s so great, take a look at this gallery of photos taken by IGN staff in-game:

The Long and Short of It

Ghost of Tsushima’s photo mode’s enormous focal length range is one of the reasons it’s so great. On the wide end of the spectrum, you can shoot at 12mm, while the longest possible “lens” is a whopping 300mm. Photo mode lets you zoom in or out 1mm at a time, so you can get the focal length exactly where you want it to be.

Ghost of Tsushima also gives you control over aperture, or “F-Stop.” In a real camera, the aperture is the hole through which light travels before it reaches the sensor (or film). Measuring the aperture’s diameter is expressed through F-Stops. An f-stop of 1.4 is open wide, allowing light to pour into the camera, while an f-stop of 22 is a tiny, allowing only a pinpoint of light through to the sensor inside. That’s all well and good in real-life photography, but the f-stop in Ghost of Tsushima is utilized for its other use: depth of field. A wide-open aperture creates a very shallow depth of field, which is ideal for highlighting a single element in a composition, or for taking portraits with a soft bokeh-effect.

A larger aperture produces a much wider depth of field. Generally speaking, in both Ghost and in real life, you want a landscape shot to be wholly in focus, which calls for a tiny aperture. The aperture range in photo mode is ridiculous, way beyond anything you’d find in real-life, but this allows you to really narrow your point of focus to get the effect you might be after, making it super flexible. (In real life, focal length also plays heavily into depth of field, but isn’t as pronounced in Ghost of Tsushima).

Speaking of focal length, there are lots of real-world photography effects you can pull off thanks to its massive focal range. Smaller numbers work well for landscape photography: the smaller the number, the wider the shot. Since it’s all-digital, you don’t need to worry about edge distortion as you would in real life, so you can go all out with that 12mm shot and not lose details at the edges.

The immediate benefit to a long length like 100mm and above is it lets you zoom in on distant features. It’s a handy feature for wildlife photography in the real world, but you don’t really need to hide in the bushes to capture a great shot of one of Ghost of Tshushima’s many animals. But another effect of super long focal lengths is how they tend to “flatten” an image. Have you ever seen a shot of a full moon dominating a skyline? It was probably taken with a long-lens. When you “flatten” an image, features otherwise far apart lose the visual distance between them, making the frame look busier or closer together than it normally would. I took a shot of one of the graveyards in Ghost of Tshushima with a long focal length to illustrate this effect. 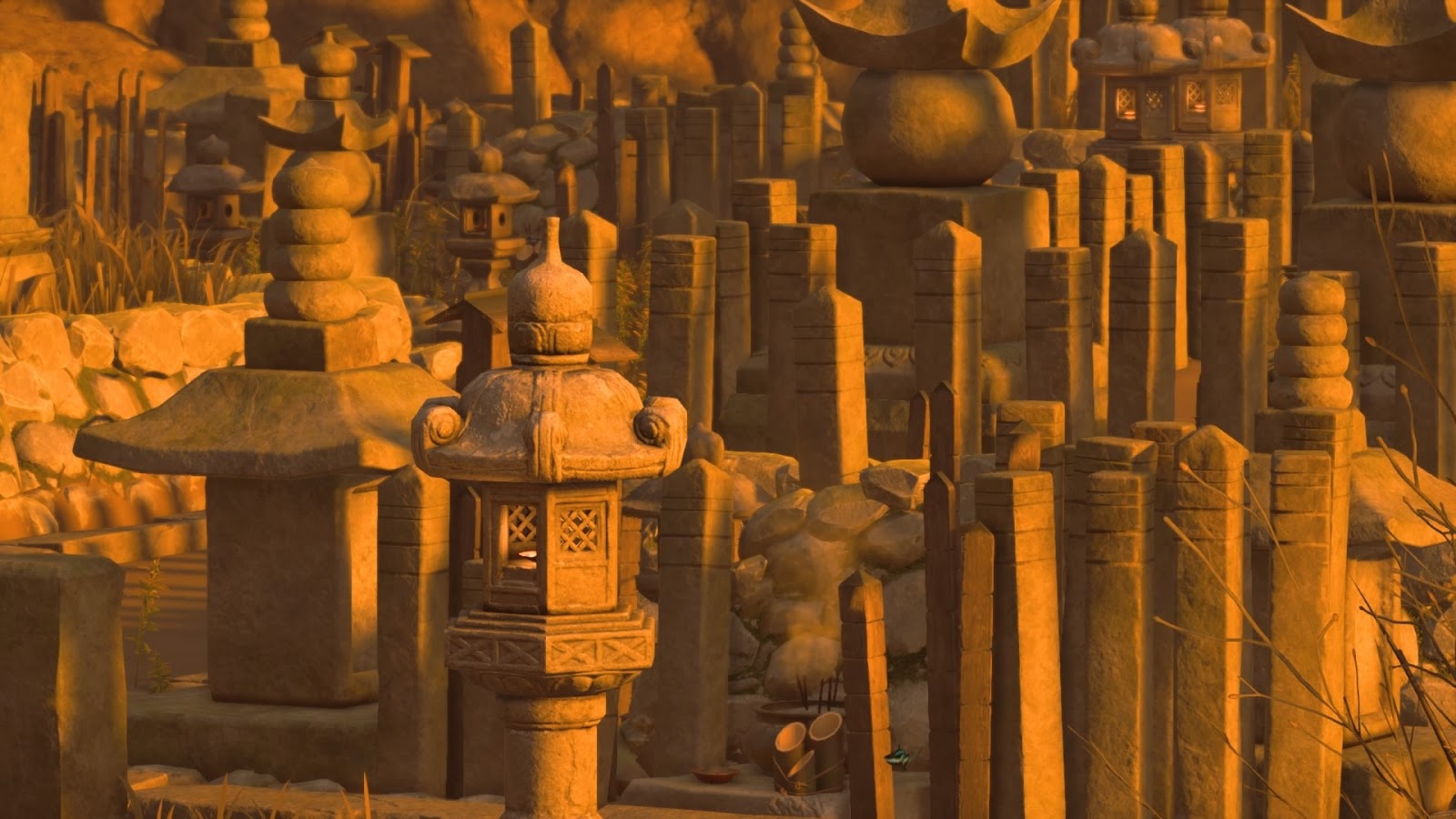 There are plenty of other options beyond just focal length and aperture to play around within Ghost of Tsushima’s photo mode to make every shot your own. You can freely move around in 3-dimensions to compose your shot, there are different filter effects you can try on, it allows you to tilt the camera for a “Dutch Angle” effect, and particle and weather effects are also adjustable. Time of day can be freely adjusted in photo mode without having any effect on the game, so if you want that gorgeous golden-hour light of the sunset, it’s as easy as moving a slider.

But perhaps the greatest asset to Ghost of Tsushima’s photography is the virtual landscape itself. Sucker Punch did such a great job laying the game out, it’s almost impossible to find a boring backdrop or ho-hum scene to snap a quick photo. Even if you aren’t familiar with compositional concepts like dynamic symmetry or the rule of thirds, the game is laid out to make nearly every angle feel cinematic. It’s astonishing in its beauty.

When combined with the ease of use and the many varied options available, Ghost of Tsushima’s photo mode is easily the best we’ve seen yet. Hopefully, more open-worlds take a cue from it when we move into even more lush environments of the next-gen.

Seth Macy is Executive Editor, IGN Commerce, and just wants to be your friend. Find him on Twitter @sethmacy.