Moving Out and Grooving Out

You probably don’t know songwriter Lenny Macaluso by name, but it’s likely you’d recognise his touch. Specifically, The Touch, the motivational masterpiece Macaluso co-wrote with singer Stan Bush in 1986. The rousing power ballad – or “power anthem” as Macaluso prefers to think of it – was inspired by a line of dialogue in the classic air force movie Iron Eagle, written with Sylvester Stallone’s Cobra in mind, and ultimately found initial success on the soundtrack for Transformers: The Movie. It’s a fist-pumping four minutes that refuses to die, resurfacing with some regularity over the years in film (Boogie Nights, Bumblebee), television (Family Guy, American Dad), and videogames (Saints Row IV, Shadow Warrior). The Touch is a song that’s lived on for more than 30 years, despite the fact it apparently took just 30 minutes to write.

“Songs like [The Touch] are written very quickly because the lyric is so inspirational; when you touch upon that vibe within your soul, the song writes itself,” explains Macaluso, now retired from the music industry. “Because you inspire yourself as it’s being written, and it’s a great feeling. I hope others can share that feeling themselves when they listen to it; that’s the whole purpose.” 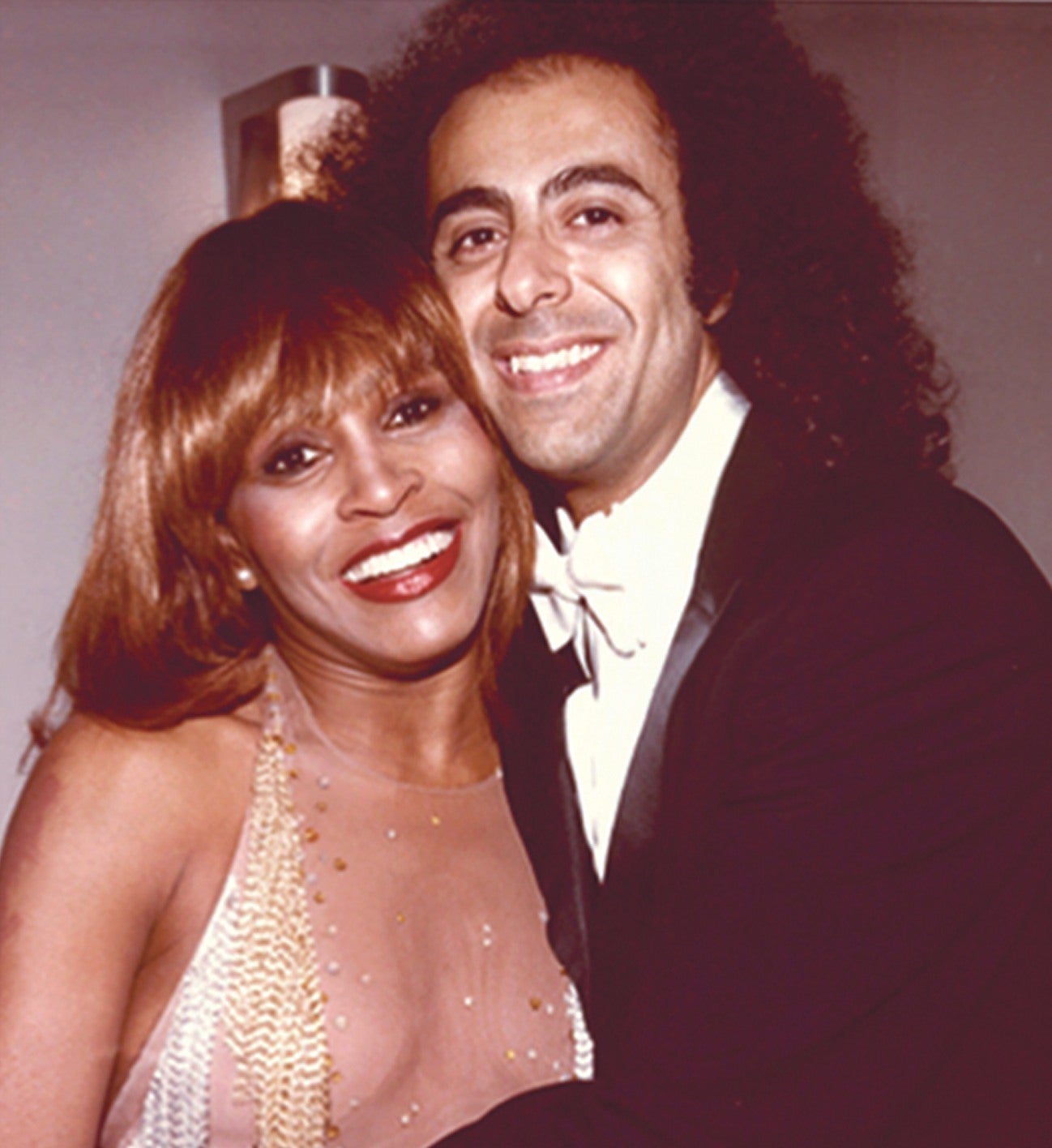 Lenny Macaluso with Tina Turner. Macaluso served as guitarist and musical conducter in Turner’s touring band from 1977 to 1981.

In early 2019, the team at Australian-based game developer SMG Studio were in need of some inspiration of their own. Work was well underway on the studio’s cartoonish couch co-op game, Moving Out, and with the deadline for finalising the game’s announcement trailer rapidly approaching, SMG Studio was desperate to find the right piece of music to suit the game’s vibrant eighties style and setting. That search would ultimately lead them to make a direct connection with Macaluso.

“Originally our plan was to get someone to write a Moving Out theme or title track, and then use stock music [for the rest of the soundtrack],” explains John Szoke, SMG Studio’s senior games producer. “During the process of getting someone to write the theme it was obvious that we weren’t fans of music that tried to sound like the eighties. We wanted something more authentic.”

A number of classic eighties songs were used as reference points by the team, including Jump by Van Halen, Weird Science by Oingo Boingo, and The Power of Love by Huey Lewis and the News. But when one of the designers dropped The Touch by Stan Bush into a work-in-progress version of the trailer, everyone at the studio knew they had found the right song for the game. Or so they thought.

“Ash [Ringrose, studio head] loved it and reached out to get the rights to use it, and that’s how we got in contact with Lenny,” says Szoke. “Unfortunately there were multiple rights owners, including the film company [for Transformers: The Movie], so using the track was not only going to be expensive but also problematic in terms of digital rights management on YouTube,”

“Lenny had dealt with other game companies before and started sending us some alternatives and we landed on the track you hear on that trailer. After that we just kept talking,” continues Szoke. “Lenny is a great guy and we had a lot in common and a lot of mutual respect for what one another was doing.”

The Origins of The Touch

“I was inspired by the movie Iron Eagle, when Louis Gosset Jr’s character says, ‘Kid, you got the touch,’” remembers Macaluso. “And I sat on pins and needles, praying that there was not already a song called The Touch or You Got the Touch already. I remember that moment specifically, sitting in Grauman’s Chinese Theatre in 1986, rushing back to my little apartment in Glendale, California, picking up my old Martin acoustic guitar with my little red cassette machine, the same cassette machine I’ve had for 36 years, and just writing that song, and calling Stan Bush and having him come over to listen to it. That moment is frozen in time for me.”

Macaluso had grown used to being approached for music licensing deals over the years, but his partnership with SMG Studio on the soundtrack for Moving Out presented him with a considerably more collaborative opportunity, one that would ultimately give life to a number of unused tracks that had laid dormant in his archives for decades.

“The Touch, Never Surrender, Thunder in Your Heart; they are always the go-to songs [for licensing],” says Macaluso. “Very rarely do I get the opportunity to pitch something from the vault. That’s why [working on] Moving Out has been so soul-stirring for me, because John [Szoke] really encouraged me to keep digging deep.”

The first song Macaluso supplied was One Track Mind, which was retitled to Moving Power and selected as Moving Out’s main theme. The song was written back in 1987, and a heavily restructured version of it was eventually recorded and released by Canadian electro-funk duo Chromeo in 2018.

Here is Moving Power as it appears in the game, which is an instrumental version of the track recorded in 1999:

“After we got [Moving Power] for the trailer we kept going back and forth,” explains Szoke. “I would send him info about the game, screenshots and so on. He would go through his archives of music he wrote in the eighties and send what he could find.”

[poilib element=”quoteBox” parameters=”excerpt=The%20eighties%20decade%20was%20an%20incredibly%20prolific%20one%20for%20Macaluso.”]The eighties decade was an incredibly prolific one for Macaluso, and by his own account there was a period between 1981-83 where he wrote and produced over 100 songs (“And that’s a conservative number, to be honest with you,” says Macaluso). In addition to these songs and countless others released by artists around the world throughout the remainder of the decade, Macaluso also wrote and recorded numerous other tracks that for varying reasons never saw the light of day.

“Danny DeVito’s character was a scammer, always running scams, so that’s why the lyric is what it is,” remembers Macaluso. “Unfortunately [Cheapshot] did not make the final cut of Twins, and I don’t think anyone’s ever really heard the song because I’ve never truly pitched it for any other opportunities.”

Macaluso’s efforts to get a song on Schwarzenegger’s soundtrack may have come up shorter than Arnie’s onscreen brother, but for Moving Out the track has finally found its purpose. Here is the original recording of Cheapshot:

Here it is in instrumental form as it appears on the Moving Out soundtrack:

Other tracks Macaluso supplied SMG Studio with were originally intended for young pop stars of the late eighties and early nineties, including Way to Go (originally titled Operator) that was very nearly recorded by Whitney Houston in 1990 at a time when she was arguably one of the most popular performers in the world.

“Operator was specifically written for Whitney Houston,” says Macaluso. “[Houston’s record label] loved the song’s melody, but I think in the end the lyric wasn’t something they were comfortable with for her as an artist at that time,”

“There’s a million missed opportunities in [the music business] but for all the ones I’ve missed, a Whitney Houston cut would make up for a hundred of the less successful artists that I’ve [worked with] in my career.”

Here’s Way to Go as it appears on the Moving Out soundtrack, a song according to Macaluso is “as melodically and structurally as close as you can come to a Whitney Houston track”:

Aside from movie soundtracks and songs pitched to pop icons, Macaluso also spent a part of his career writing and recording soundalike songs for commercial use.

“Sometimes [advertising agencies] want something that sounds like Material Girl, but they don’t want to pay for a Madonna song,” explains Macaluso. “Fortunately I have a back catalogue for opportunities like that.”

One such composition is Rocking Moves, an instrumental that’s highly reminiscent of Tom Petty’s 1993 hit Runnin’ Down a Dream, because that’s exactly the song it was written to replace. Here it is as it appears in Moving Out:

The Life of Lenny

While Macaluso’s musical career began when he was fresh out of high school in the mid-sixties, it’s in the eighties that his songwriting achieved its commercial peak. In addition to The Touch for Transformers: The Movie, Macaluso penned songs for a string of films including Jean Claude Van Damme’s Kickboxer, Mel Brooks’ Spaceballs, and classic skateboarding movie Thrashin’. Moving Out isn’t the first time Macaluso has collaborated with Aussies, either – his song Thunder in Your Heart was recorded by Aussie music legend John Farnham for the 1986 movie Rad, and a Stan Bush cover of the song produced by Macaluso for a 2012 Carlton Draught beer commercial that aired in Australia and won the Golden Lion Award for Best Beer Commercial in the World at Cannes in 2012. “I really love the folks in Australia, I really just love that vibe,” says Macaluso. “Believe me, if I could turn the clock back I would move there.”

Music to Move You

It certainly seems fitting that the development of a game about moving house (albeit in the most chaotic, hilarious way possible), would lead to the discovery of a soundtrack made up of mostly unheard, decades-old recordings, as though they were from a shoebox full of cassette tapes someone found shoved under the bed when they were boxing up the spare room. The end result is a game that sounds authentically rooted in the eighties without actually featuring any tracks you recognise, as though it arrived from a parallel dimension.

“The eighties was really my era, and I wish it would have never ended,” explains Macaluso. “But when I revisit these songs, I really do relive the moment.”

Macaluso in 2020, surrounded by his gold and platinum records.

Equally, it seems appropriate that the process of assembling the Moving Out soundtrack would be so collaborative, since working together is such a key component of the game.

“My greatest love is working with excellent [collaborators], because they bring your A game even further to an A+ game,” agrees Macaluso. “I just really wanted to go a cut above. I saw how much [SMG Studio] were putting into it, and you know they’re not an Activision, they’re a small company. I wouldn’t be encouraged by some of the bigger companies to participate like that, to the point that they even gave me a music supervisor credit on the game. So it was fulfilling for me, to be able to really step up and contribute to a significant degree.”

For SMG Studio, the feeling was clearly mutual.

“It was a constant back and forth throwing ideas around and we had a lot of fun,” explains Szoke. “We enjoyed it so much that we designed a level around him and named it Lenny’s Mansion, and threw a heap of musical memorabilia in there including framed gold records,”

“We probably went a bit overboard, but that’s what Moving Out is all about!”

Moving Out is coming to PlayStation 4, Xbox One, PC and Nintendo Switch on April 28. You can stream the soundtrack in full here.

[poilib element=”accentDivider”]
Tristan Ogilvie is the video producer at IGN’s Sydney office. He also wishes the eighties had never ended. You can find him here.